‘All-lane running’ or, in other words, ‘no hard shoulder’

Imagine. A dark, wet and windy Sunday night on the M25. This is the relatively new, somewhat oddly named, ‘all-lane running’ section between Sevenoaks and Godstone (junctions five to six in motorway language).

The response to capacity issues (and the desire to avoid more concrete in the Green Belt) has been, as in other places, to make the old hard shoulder into an active lane. If you do breakdown there are emergency refuges every 2500 metres or so but you can also make use of the hard shoulders on slip roads and motorway services. However, if you breakdown in between those refuges it must still feel pretty scary – issues well flagged up by the RAC, whose patrol people have to deal with incidents, and others.

Interesting to note that the new capacity has been filling up fast. Not surprising when you consider the alternatives – I can still remember when the A25 was the main east/west road in those parts of Kent and Surrey:

Busy that night – all the four lanes full, but traffic moving around 50 mph. Interesting driver behaviour. The ‘block’ feeling of four packed lanes seems to induce more undertaking and lane hogging (what was that man thinking when doing 40mph in the third lane!).

So, when a sign appeared which indicated the inner lane was blocked due to a ‘stranded vehicle’ I thought this is going to be interesting. The signs actually worked well. There now appear to be more signs which are only mounted on the left side of the road, rather than the massively intrusive and presumably expensive and difficult to maintain, gantries that run right across the road.

Lots of warnings, people got out the inner lane, everything slowed down a bit more and we finally passed the ‘stranded car’. A relatively small, older Ford Ka. The driver had tucked the car right up against the barrier (there is a small strip). However, somewhat terrifyingly the driver was sitting in the car. We know from our visits to Highways England’s regional control centres that these sections of network are monitored by CCTV and a traffic officer would be deployed immediately to an incident of this type. But would the broken down motorist presume help was coming if they just sat there? I wonder what happened in the end.

Having passed the stranded car it was unclear if it was okay to go back into the inner lane. Drivers hovered, as we did, not sure what to do. Was there another car up ahead stranded or was that lane clear. Finally, this signal came up: 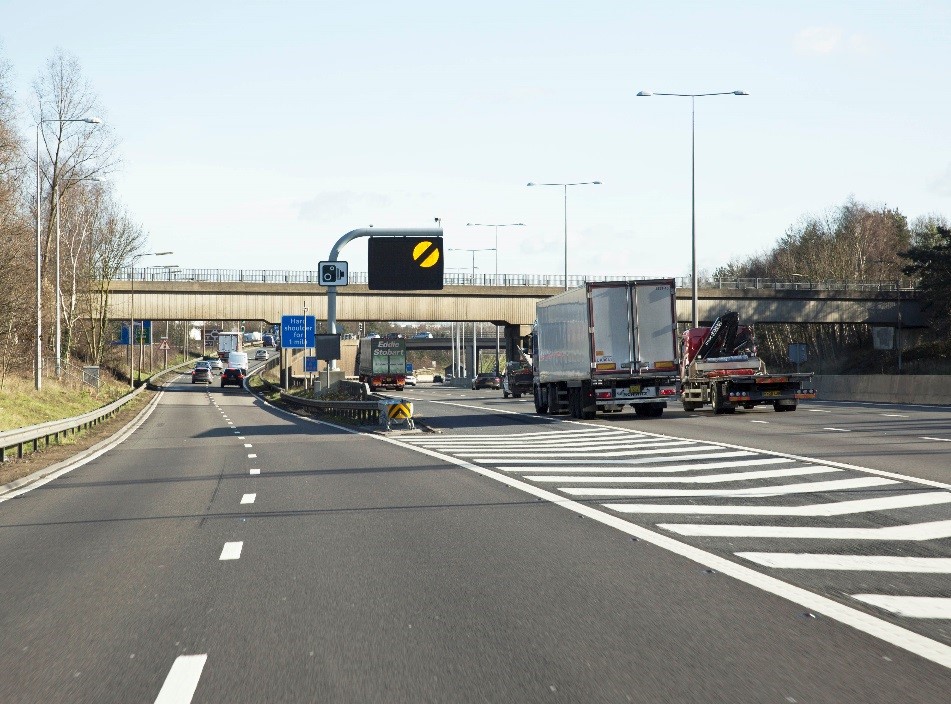 This caused a lot of interesting debate in our car. My wife thought it meant no parking. My daughter thought it was a full moon. I think I divined it is the national speed limit sign so presumably okay to get going again? Not clear – there perhaps needs to be an ‘all clear’ sign that is easy to understand.

The use of so-called smart motorways (where technology is used to manage congestion) and all-lane running is a pragmatic response to traffic levels and road capacity. It also reflects the fact that modern cars are much more reliable. Interesting the RAC report the main cause of breakdown is now flat tyres – complicated the fact new cars now don’t generally come with spare tyres. However, there needs to better communication about the safety aspects. To me it simply doesn’t feel that safe even though I know all the statistics, etc. The Transport Select Committee is looking into this and details can be found here.

Our evidence is here.

All-lane running will probably become more of the norm – in fact by 2020 Highways England expect to have started work on some 480 miles of smart motorways with 286 miles already completed. More information and education is perhaps needed so we all understand it a bit better?

We will be doing more research on this in the course of this year.