As the rail National Passenger Survey (NPS) enters its 12th year you can start to see some of the trends that underlie today’s statistics. While getting trains on time remains the key factor behind passenger satisfaction, its importance has slowly declined over the years. Performance, while still patchy, has slowly improved.

As punctuality has dipped what do you think has become the main factor that has risen in its place?

Clean trains. Not perhaps what you might expect. However, good news for the industry as, compared to getting trains on time, cleaning them should be easy. This the classic ‘hierarchy of needs’ in action – as our main needs are satisfied so we move on to worrying out somewhat less important things. Generally, according to the NPS trains are pretty clean.

However, we passengers must also do our bit. Some longer-distance trains now have litter pickers who come along and take away the mountains of newspapers, coffee cups, food wrappers and other trash we all generate in vast amounts. It could not be easier (although it would cheer me up even more if they told us they recycle the stuff – which they do).

On a recent journey to Manchester my colleague sat next to someone who, despite three visits by the litter picker (often very chirpy nice people who are the person from the train company you have most contact with!) managed to accumulate the attached little dormouse pile at their feet – including an apple core (below the red arrow). Bit depressing really. 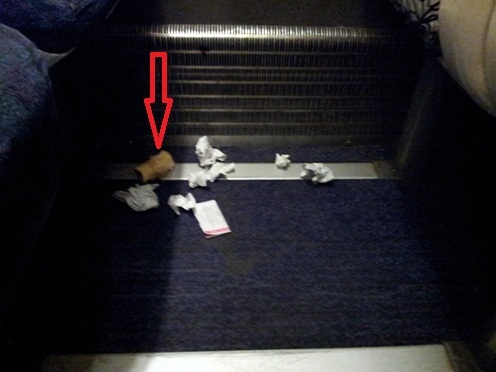 What do you think – was this a one-off or is litter becoming a problem? Take our poll or have your say in our forum.