Recently on a sunny Sunday morning I was heading down from south London to see my sister and her family in Bidborough, Kent. Train not an option this time due to engineering work lengthening (and adding risk) to our journey. Yes, I admit, I am one of those annoying people who use the motorway network for short local journeys because – it makes sense!

Decide to try the M25 option with a little trepidation – like many drivers stated in our initial research about users’ experiences of England’s motorways and major ‘A’ roads (the Strategic Road Network or SRN), I am a bit wary of the M25. This section is one of the ones that has four lanes in permanent use and no hard shoulder. The M25 has a slightly mythical status – a beast of a road as users told us last year.

Try to set off reasonably early to avoid the crowds heading to the big shops around Croydon and Purley.

Needless to say all went much better than I thought – expectations exceeded, me happy at end of day. Not much traffic on the A22 (not actually part of the SRN so presumably looked after by Surrey County Council), but as soon as I hit the eastbound, anti-clockwise M25 junction 6 at 10.30am it is clear quite a few people got up earlier than me!

Four lanes of solid traffic (no hard shoulder here) and quite a few trucks. However, all moving along at a relatively steady speed. I join the inside lane and am doing 60 mph straight away, so the other traffic must be going 70 mph plus.

On the westbound, clockwise carriageway things are a bit more sticky. Some contractors’ vans were blocking one lane, on the return journey I saw why – someone had gone through the barrier into the field earlier, plus a broken down car. Thankfully, I could see the occupants out of harm’s way behind the barrier up the embankment. They were anxiously peering into the distance from where help was hopefully coming.

Incredible how quickly the queues build up – I have heard that a minute’s delay causes a mile tailback. Our key road (and rail) infrastructure is feeling the strain as user numbers rise and resilience is under pressure.

Did the odd-feeling right-hand filter off the M25 (not many of those) onto the A21 at junction 5. The road surface is a bit patchy – you can see why this came out as a priority factor in our work with users on what they want to see improved on the SRN.

Coming home again one lane still blocked as the clear up continues. As I have said in earlier blogs the signs work well apart from one thing. The ‘all clear’ is indicated by the national speed limit sign – the circle with the diagonal bar across it as seen below. 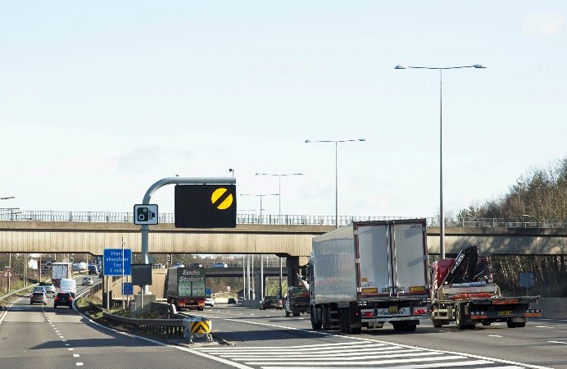 One-hour journey in each direction – some 38 miles each way with journey planners saying 58 minutes ‘without traffic’. Predictable, dull with few events. A good journey. The only thing that really alarms you is some other people’s driving – too fast, too close.