I am still remembering the wonderfully warm welcome we received in Liverpool where we published our Bus Passenger Survey last week. It wasn’t just the buses welcoming our visit (see below), but the focus on the city has turned out to be timely. 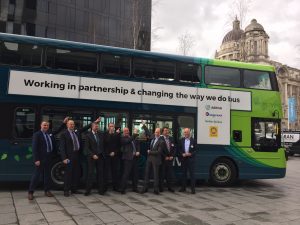 Today, the House of Commons’ considerations of the Bus Services Bill draw to a close. When law, the Act should enable a range of agreements and partnerships between transport authorities and bus operators. We saw one new type of partnership agreement in Liverpool – the City Region Bus Alliance which includes the transport authority Merseytravel, Arriva and Stagecoach. And they aspire to be ‘the best in class’!

The partners are aligning themselves behind common aims. Firstly they set target to grow the number of fare-paying passengers by 10 per cent by 2017-18 from 2013-14.  They have invested in new buses and other improvements such as on board WiFi, USB charging points and new ticket offerings.  They have already seen an increases of 9.7 per cent – so close to their target. 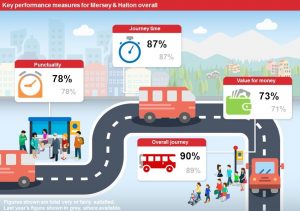 This is an interesting model of partnership with the passenger interest at its heart. It features authorities and operators working together under a board structure, setting joint targets, measuring and assessing how well they are doing using our Bus Passenger Survey. This is similar to the arrangement in the West Midlands.  Let’s hope the Bus Services Bill will provide the impetus for similar models in other parts of England.

Here are the slide presentations from the event.