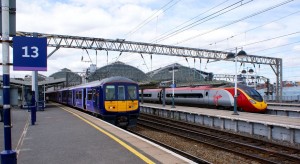 In the midst of all the understandable frustration about the delay in electrifying more routes in the North it is easy to forget some routes have been already been completed and have electric trains running. A colleague reports on his first experience of refurbished trains on Northern Rail:

“My first trip yesterday on the 12.15 from Liverpool to Manchester Airport, as far as Manchester Piccadilly.

Having set off from Liverpool what was immediately noticeable was how much less mechanical noise the train made than a diesel. However, all those openable windows will make for noisy trips.

Rather frustratingly the public announcement system was too quiet to be heard clearly, certainly by anyone with less than average hearing, while the train was moving.

Viewing the scrolling stations on the information screens there were some utterly needless abbreviations, don’t Northern realise that there is no need when the display scrolls? Even Llanfairpwllgwyngyll can be in full!

For some reason Newton-le-Willows is in full, but Manchester Airport becomes ‘Manchester Apt’, then there’s ‘Manchester O Rd’, which to strangers could be too terse, and ‘Manchester Picc’. There is no need for any abbreviations and seemed confusing for passengers.

The refurbishment is limited and especially because of the retention of the original ‘two plus three’ seating style, the trains don’t match the current standards on the longer-distance routes such as Manchester to Windermere.

The performance was miles better, off up through the cuttings out of Liverpool like a train that’s powered by a motor, not someone pedalling! It easily coped with the schedule, and was obviously right behind Arriva Trains Wales’ 10.44 from Llandudno, due into Manchester Oxford Road 9 minutes before.”

It will be interesting to see how passengers react; another colleague overheard someone on one of these trains saying “….nice new train”… 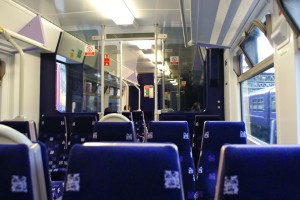