You may well have seen them somewhere. The new orange roadwork signs that are sprouting up on a few major roads. What do you think? I experienced them this summer driving on the M3 – I think they are a big step in the right direction.

They’re part of a trial by Highways England aimed at ‘improving customer experience at roadworks’. Transport Focus visited the Balfour Beatty construction site for the dualling of the A21 between Tonbridge and Pembury this month, to see how the pilot is working on the ground.

The A21 is one of a series of pilots under way since June (others are at the smart motorway sites along the M1 from Leicestershire northward and the M3 in Surrey; and at a smaller-scale maintenance scheme – already completed – on the A40 at Gloucester).

What some are calling ‘Project Orange’ entails distinctive new orange signing along the works aiming to change driver behaviour and improve safety, and, on the two motorways, orange theming to safety barriers and other installations along the roadworks.

The pilot does so far seem to be successful in generating an unusually high level of feedback from users. There have so far been hundreds of comments across all the pilot schemes, with a large number in fact coming from the A21; this may be because as a construction site alongside an old single carriageway road, it has more impact for drivers than the two smart motorway schemes in the trial, even though they cover longer distances and affect more traffic.

The trial will be evaluated. Comments from drivers so far are apparently encouraging, with some reporting a clearer sense of the distinct environment of the works zone and when to start changing their behaviour. Some comments generally about the schemes say that they do indeed drive more carefully, with more respect for road workers and other users. We noted however that as the orange signing only begins at the start of works themselves, queuing traffic ahead of the site would not see anything different until they reach the site.

My M3 observation is that the signs are thought-provoking but need a more meaningful implementation. Some of the signs are small, lean precariously weighed down by sandbags and can get a bit lost – particularly amidst all the other standard signing that Highways England is required to display at roadworks. The real challenge the company now has is combining the new orange signing most effectively with that DfT-mandated signing.

Nonetheless, it’s a novel way of cracking a real problem. Accidents in roadworks are a significant cause of harm and delay. 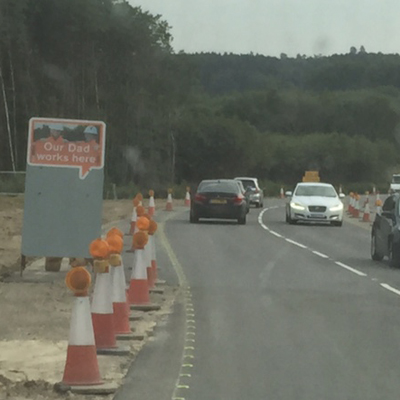 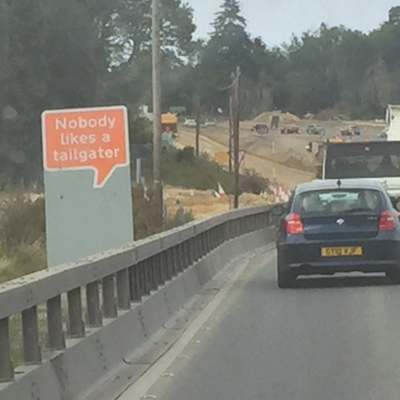 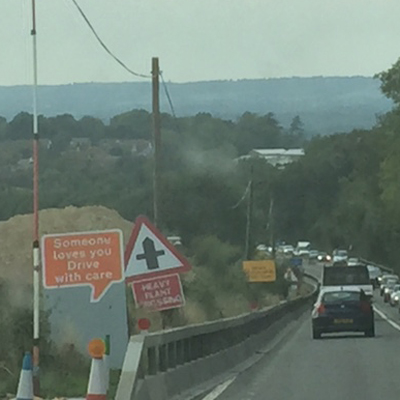