‘Welcome to London Bridge’…or not

At the risk of stretching the interest of regular readers I must return to the rebuilding at London Bridge. Sunday saw me attempting my regular run down to Sevenoaks to see my dad. A forensic examination of the National Rail Enquiries website and using the journey planner seemed to indicate no problems with the service.

So we set off with high hopes. Those of you that know and love London Bridge will be familiar with the temporary ticket office setup in the shadow of the Shard, it has been there some time. To get there from the Underground you have two choices – use your season ticket Oyster card (if you have one) to go through the barriers, up the escalators and out of the barriers again at the upper level to reach the ticket office. However, I was travelling with my daughter so needed to get a ticket for her as well as me. So we needed to stay away from the barriers and head straight to the ticket office.

Knowing exactly where to go we wheeled right out of the Underground gate line to the escalators that take you up to the bay platform concourses. As we rounded the corner past the shops that lead you to the escalators something looked wrong. We, along with many other people, walked up to the escalators to see they were gated off. No way up there, no lifts and no stairs – see photo below. 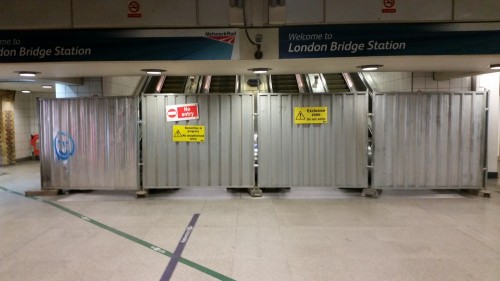 Also, there were no signs or staff telling us where to go. I saw dozens of people, some with luggage and someone in a wheelchair, come up, and then retreat, baffled. You had to work out that the only way up was via an escalator under the Shard. I finally found three staff talking to each other about their weekends. I have no idea how the person in the wheelchair fared as they probably had to go round via the street adding about another ten minutes to their journey and a lot of stress.

Retracing our steps later we found a notice at the end of the corridor which had some techie information on it about the platform closure which also barred a normal access route to the overbridge and the through platforms. In the course of the weekend thousands of people were inconvenienced and baffled and some probably missed trains. There appears to be no one in charge, no sergeant major taking a common sense view of what is happening and doing something about it. Staff there seemed hazy on the routes to take. Even the Sock Shop staff member at the end of the corridor said the information was terrible and people were baffled.

When there is a major change of walking route for passengers should someone sit down and work out how to make it flow? There should have been three signs and a staff member at the end of the corridor. Why is common sense not being applied on this project? Is this happening in other places where major re-builds are going on? Passengers deserve better. 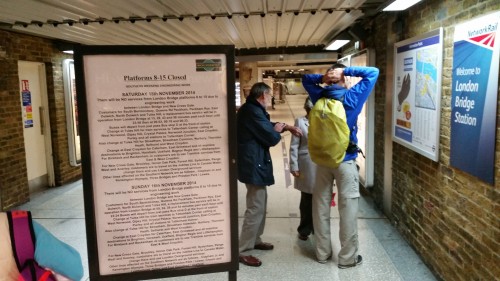 Here is a free bit of consultancy for the train companies and Network Rail to use when changes are planned: