Automated announcements like this one heard recently at Manchester Victoria are ever present at stations across northern England. Sorry seems to be the hardest word? Well, not it seems if you program a computer to say it for you!

In thirty minutes at Manchester Victoria station on 19 November, a colleague noted 51 separate automated announcements in 30 minutes. Of these, 33 offered an apology for a delay or cancellation, nine announced the next train at a platform and eight warned passengers to keep hold of their ticket, not to smoke, to leave luggage unattended et cetera. Just one announcement was made by a real live human voice, announcing a platform alteration – shortly after the computer had made exactly the same announcement.

Is this formulaic and almost continuous droning what passengers want? Is it helpful, and can any organisation be truly sorry if it uses a computer rather than a human to say so?

What passengers tell us is clear: computers cannot be sorry. If you are genuinely sorry, get a human to say so. Our 2014 research Passenger information when trains are disrupted recommended “To increase trust and believability the industry should make live announcements during disruption, whether at stations or on trains, in particular avoiding automated apologies”.

Some train companies have made incremental improvements: with a tweak of the software Southeastern responded to passenger feedback and cut out the second apology “for the delay and inconvenience caused”. This change also means that non-essential messages are now supressed during disruption and that Southeastern can automatically announce when a train is expected to be delayed beyond the Delay Repay threshold of 30 minutes – a helpful reminder to passengers that they are entitled to claim compensation. The rest of the industry needs to emulate this good practice, for instance Northern could do this to promote awareness of the Delay Repay for delays of 15 minutes or more that takes effect from this Sunday.

It is right the industry apologises to passengers when things go wrong. However, passengers don’t really want apologies – even from a human – they want a service they can rely on. Right now that is not happening, especially across the north of England where ongoing delays and ‘short-forming’ mean overcrowding and discomfort for many.

Last month, Transport Focus held a board meeting in public in Manchester where the chief executive of Transport for the North and the managing directors of both Northern and TransPennine Express faced searching questions about problems across the region that continue to disrupt the lives of far too many rail passengers. Nobody was able to promise big improvements to punctuality and reliability in the foreseeable future, so it’s clear the industry has a long journey ahead to win back passengers’ trust.

Sorry seems to be everywhere you look at the moment. South Western Railway passengers may have seen a notice like this one below, offering apologies from Network Rail and South Western for the serious disruption caused by overrunning engineering work on 19 November. Others may have seen something similar referring to the most recent round of signal problems near Woking on 11 December.

Passengers across the rail network look forward to a time when they don’t hear the word “sorry” quite so often. 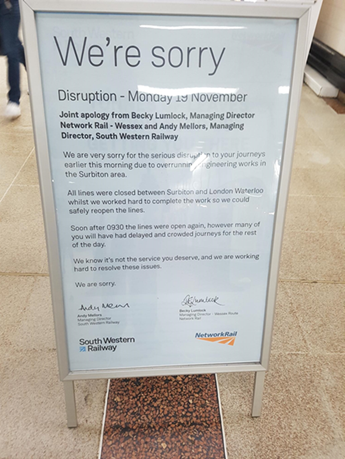