The M40 has been rated the motorway with the best journey experience in England in a survey of drivers by the independent watchdog, Transport Focus.

In the latest Strategic Roads User Survey the motorway between London and Birmingham had the highest overall satisfaction at 79 per cent.

The watchdog spoke to more than 5000 road users about their last journey on a motorway or major ‘A’ road managed by National Highways.

Drivers were least satisfied with the A1 at 57 per cent.

“England’s motorways and major ‘A’ roads are its arteries, allowing people and goods to be moved around efficiently. These results show that what drivers experience varies from road to road, with journey time and how busy it is being key to journey satisfaction.

“As the summer getaway begins, this survey shows the importance of National Highways striving to minimise hold ups and providing good information so drivers know what to expect if it will be busy.

“And it points to the ongoing need to focus on delivering roadworks with the least disruption possible, as well as keeping road surfaces in good condition.”

Commenting on the M40 one driver said: “It’s the quietest and easiest motorway I use”. Another said: “M40 a nice wide motorway with rarely too much traffic problems.”

Road users praised the new section of the A14 between Cambridge and Huntingdon saying, “nice new road, smooth, no potholes, fast, easy traffic.”

One driver said the A1 has: “far too many road works without any work taking place”, while another said: “traffic very, very slow moving. As always at this time on any weekday”.

On the M6 many road users commented on not feeling safe on smart motorway sections and the long stretches of reduced speed limit due to roadworks. One driver said: “the amount of roadworks and lane closers with ZERO work activity is beyond sense”. Another said: “the inside lane of the M6 (in both directions) are rutted”.

The Strategic Roads User Survey focuses National Highways on initiatives that will improve the driver experience. The survey is named in the Government’s second Road Investment Strategy and it is expected to be used from April 2023 as part of holding National Highways’ to account for delivering good customer experience. 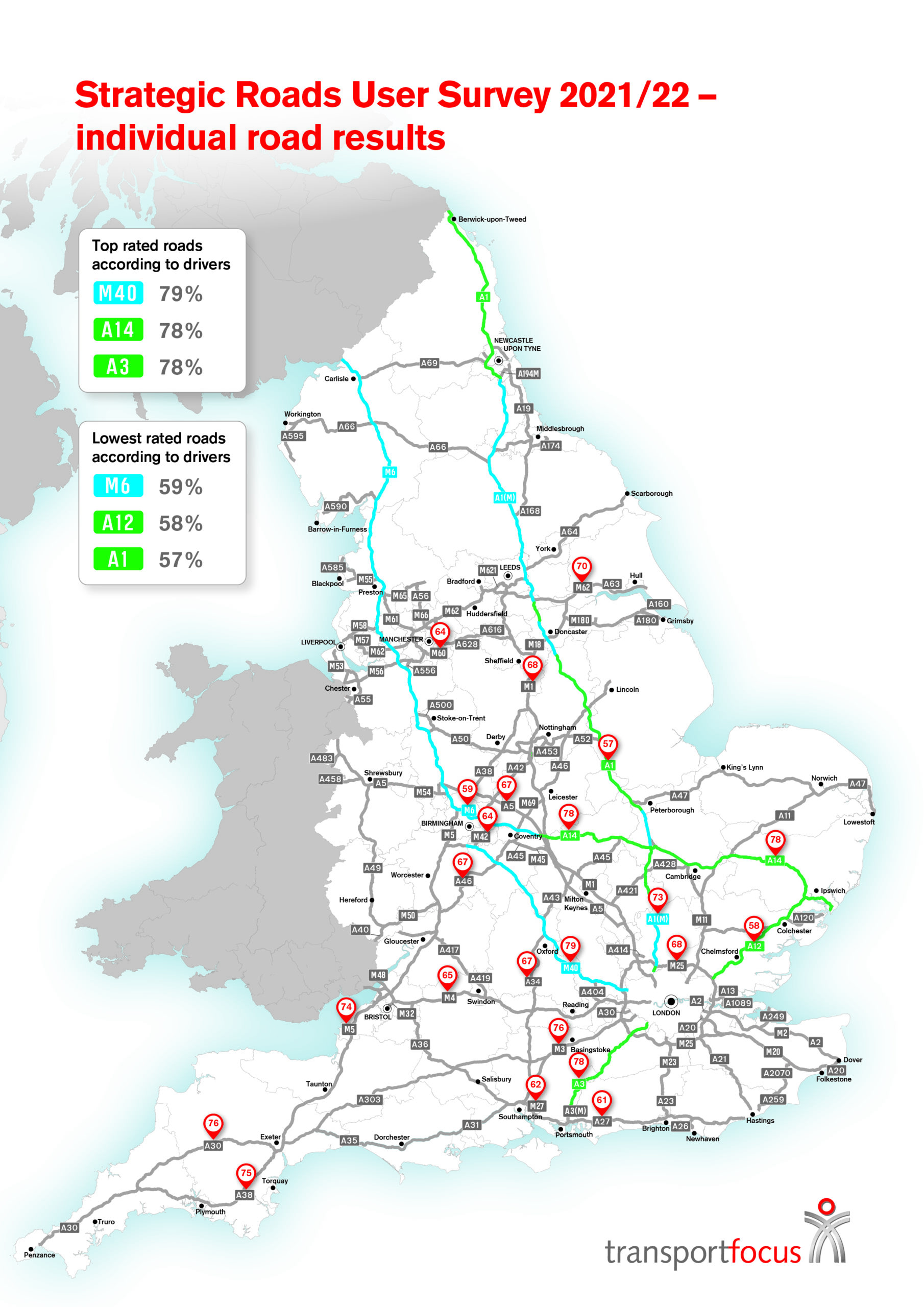 Transport Focus spoke to 5,246 people about their last journey using a motorway or major ‘A’ road managed by National Highways. Please see our data hub for further results.