People in the West Midlands urged to ‘Give Bus a Go’

People across the West Midlands are being urged to ‘Give Bus a Go’ this September as part of a campaign to encourage more journeys by bus.

The campaign – driven by the independent transport user watchdog Transport Focus – kicks off as new research finds that 25 per cent of non-users would consider making more journeys by bus.

“Whether commuting to work or seeing friends and family, buses are vital for keeping the West Midlands connected.

“To help more people choose bus it’s essential that services turn up on time and offer good value for money.

“Operators and local authorities must work to make buses a more attractive and sustainable choice for new passengers.

“Transport Focus wants more people in the West Midlands to Give Bus a Go this September.”

Speaking at the launch of the campaign Andy Street, Mayor of the West Midlands added:

“Buses are often overlooked when it comes to getting around the region but, with 260 million journeys taken a year, they are actually the most popular form of public transport. Latest figures show patronage rose by 1 per cent, bucking a national decline.

“Not only do buses provide an essential lifeline for our communities but they also help in our fight against climate change and air pollution by getting people out of their cars.

“I am committed to having the first clean fleet outside of London by the start of 2021, and as part of this upgrade we are also introducing contactless payment, free Wi-Fi, charging points and extra legroom on our buses.

“There is no better time to travel by bus, and I would implore everyone to Give Bus a Go.” 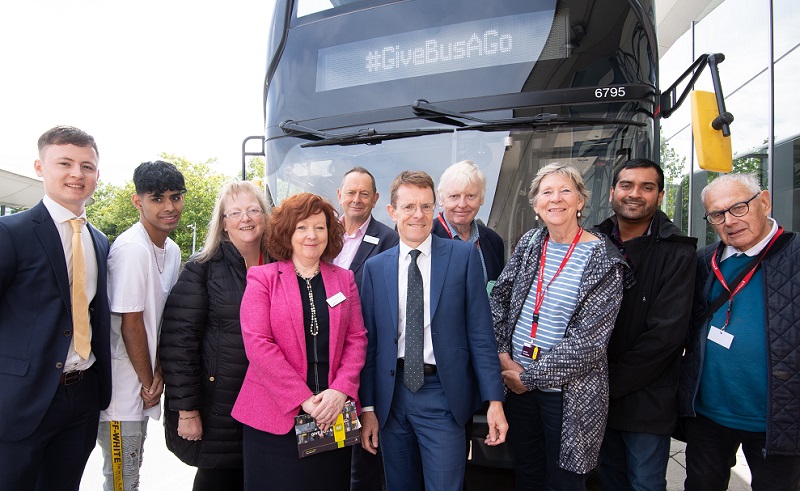 To promote the campaign a group of people who live and work in the West Midlands but rarely or never use buses have pledged to Give Bus a Go in September.

These ‘Busketeers’ are choosing to #GiveBusAGo for their day-to-day journeys and will use social media to discuss their experience and feed back to Transport Focus using an app.

Transport Focus will use the intelligence gathered by the Busketeers to highlight the benefits of bus travel and how operators can improve services.

Despite being vital to society and the UK economy, bus travel doesn’t always get the recognition it deserves. Buses are Britain’s most widely used mode of public transport and are popular with those who catch them: almost nine out of ten bus users told the Transport Focus Bus Passenger Survey 2018 they were satisfied with their most recent journey.

Among passengers in the West Midlands Transport Focus research has found that their top three priorities for improvement are more frequent services, better punctuality and buses going to more places they want them to.

Transport Focus research also indicates that around one fifth of journeys currently made by car could well be made by bus.

More than half the people surveyed in the West Midlands also confirmed they believe that buses can play a part in reducing air pollution.

During September campaign activities across region will seek to engage people returning from the summer holidays to encourage more of them to Give Bus a Go.

Over the coming year Transport Focus will be work in partnership with Transport for the West Midlands, bus operators and local authorities to understand current challenges and trial new initiatives to improve services and the passenger experience.

Visit the Give Bus a Go website to find out more about the campaign.