Transport Focus has put smart motorways to the test.

The M6 10a-13 stretch near to Cannock and Stafford, close to the north-west end of the M6 toll road, is now a smart motorway, including an all-lane running section where the hard shoulder is made into a permanent running lane.

Many drivers doing regular long distances will also see the high level of roadworks in action. Transport Focus welcomes this investment. But the sheer number of different schemes, each needing several miles of additional driver patience, concentration and understanding will surely have an effect on road users. This is something Transport Focus intends to monitor as construction starts on more schemes. 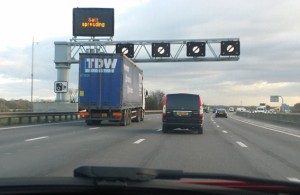 When our team was there the first overhead gantry on the new smart motorway section displayed the national speed limit sign over all lanes. The rest of the journey through the smart section saw the variable mandatory speed limits in action and certainly helped with traffic flow at sections where slip roads joined onto the M6.

However, the quality of the road surface was an issue within the smart motorway section. Previous research by Transport Focus found that road surface quality is the top priority for improvement among road users, but the experience of such a poor ride in a new section of road improvements was concerning. 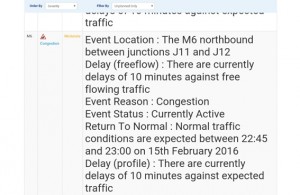 Our team returned in the late evening, with roadworks leading to delays. Junctions 11-12 of the M6 had three of the four lanes closed. However, it wasn’t clear what the cause of the delay was and a nearby variable message sign (VMS) was blank. Transport Focus tried to investigate using the Traffic England website which indicated the problem was ‘congestion’ (see screenshot, right) but it did not specify the root cause.

All traffic was squeezing into lane four and the sheer volume of heavy goods vehicles trying to come over to the outside lane was problematic. There were two more lane closures, but there didn’t seem to be any consistency between the way these lanes were closed. 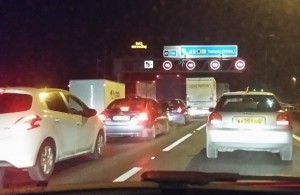 Transport Focus welcomes the benefits of smart motorways – better signage and flow of traffic that seemed to help keep things moving – but wants to know more about road users’ experiences of using them. Look out for our research in 2016-17.