Earlier this year the Transport Focus team headed off to Highways England’s regional office in Bedford to understand more about the road network in the East of England. You can read about the journeys there here.

In Bedford we met Highways England regional director Catherine Brookes and her staff. We learned about the particular issues in the region (a significant proportion of concrete surfaces being one), her team’s desire to focus on the top three road user priorities for improvement and on improving communications with road users. A useful visit. And great to see Highways England focusing in on the results of our road user priorities for improvement research! 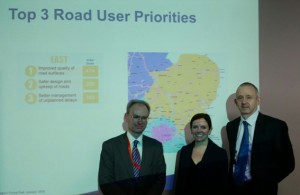 At the beginning of February our Road User Panel met. This involves a wide variety of road user stakeholders. We share progress on our research, receive feedback and share information. Topics discussed at this meeting included progress with the new road user satisfaction survey, roadside facilities research and our work in connection with Operation Stack.

We’ve also been to Beaconsfield motorway services to meet Andrew Long, chief executive of ‘extra’, which operates nine motorway service areas. We discussed our road users’ needs and experiences of roadside facilities research (fieldwork for which is now complete). We also heard its perspective on satisfying users’ needs and how this can help facilitate safer journeys by encouraging drivers to stop and rest.

Other things we’ve been up to include running focus groups to understand road users’ experiences when there are delays and disruption to journeys, whether caused by an incident or roadworks. We’ve met Sustrans to understand its priorities for improvement on behalf of cyclists, participated in Highways England’s forum focusing on the ‘vulnerable’ users of its roads (pedestrians, cyclists and others). And I spoke at the Westminster Energy, Environment and Transport Forum seminar about road users’ priorities for England’s motorways and major ‘A’ roads.

Finally, one of the things we’ve noticed when out and about is how road signs can be a neglected part of the infrastructure – in terms of basic ‘TLC’. But I’m pleased to say we’ve had a small success after noticing that a sign near the start of the M6 was covered in lichen. It’s been cleaned and Highways England’s contractor sent me a picture (see below) to prove it! 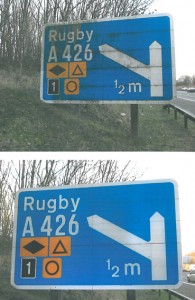 A question for the company, though, must surely be why did it take the watchdog to point this out?