Our road user director spent a night out behind the scenes on the M25 watching an army of workers resurfacing the road.

Quality of road surface and management of roadworks are two key issues for motorists. Transport Focus’s road user director Guy Dangerfield was invited by Connect Plus, the consortium which operates the M25 on behalf of Highways England, to see a team renewing sections of concrete surface near Leatherhead in Surrey.

“First, we observed the process of closing three of the four lanes. Standing on a bridge over the motorway watching how drivers behaved when the ‘red x’ was displayed was fascinating.

“A large majority were dutifully moving over to the outside lane – the one that remained open – but a significant minority were not. Whether that was because they hadn’t noticed it, didn’t know what it meant or were wilfully ignoring it who knows. One thought occurred to me. Is the red x being displayed too far in advance of the first cones for the instruction to feel ‘real’ to drivers?

“We then went down to the roadworks site itself. Work started at 10pm, lifting defective sections of the concrete surface, laying new concrete before reopening the road at 5am. The sections to be removed were lifted out – some by vacuum and some using chains – and put onto a waiting lorry.

“Eventually there was a neat hole the width of one lane. Then a concrete mixer backed up and the hole started to be filled. The mixture used had more cement and less water than ordinary concrete, specially developed for this project.

“It has to ‘cure’ fast while being strong enough for the heaviest lorries the next day. We saw first-hand the value of contingency planning and redundancy. A conveyer belt on the concrete mixer broke and a replacement was whistled up within a couple of minutes.

“Once the hole was filled, an army of workers, with hand tools started to smooth the surface – plaster-style, before drawing something akin to a fine golf-bunker rake to give the surface texture for anti-skid purposes. Once they were happy with it a couple of what looked like sturdy garden gazebos got placed over the completed section, their sides were dropped and a gas heater and fan were brought in. I didn’t realise that concrete curing is a chemical reaction not simply drying. The interior of the gazeboes were heated to help speed up the reaction.

“All in all, a fascinating insight into what happens when most of us are asleep. And in this case achieved with minimal impact on traffic – most of the time the volume was such that the single lane still open coped fine.” 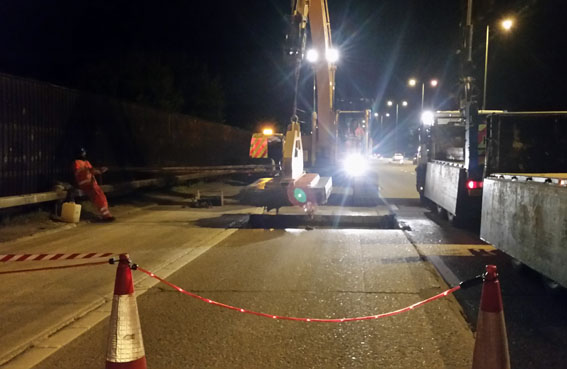 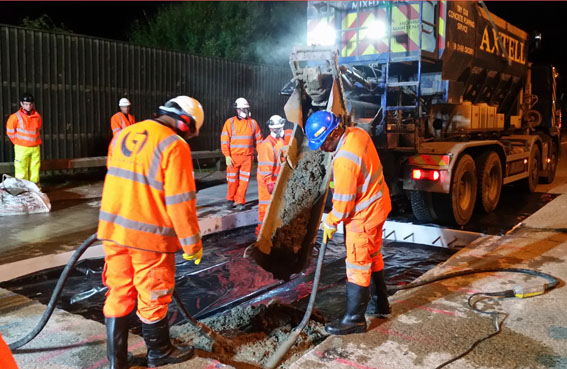 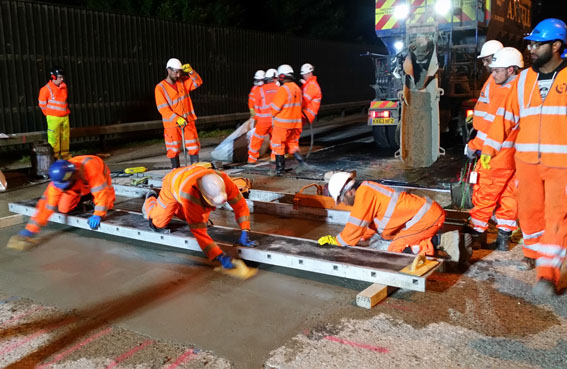