Who clears the trees from signs?

Transport Focus has been to Mansfield to look at how new-style maintenance arrangements will improve things for road users.

Highways England divides up its roads into 13 maintenance areas and, traditionally, maintenance decisions and the work itself has been outsourced to private companies.

In the East Midlands – Highways England area seven – planning and decision-making has been brought in house, although the work itself is still outsourced. Highways England now has more direct control over how its assets are maintained, which should result in higher quality and lower cost.

We talked to the new team about how it could deliver more for road users. This included getting the basics right – something that is part of our regular discussions with Highways England.

One key area that we challenge Highways England on regularly is keeping road signs clear of vegetation. 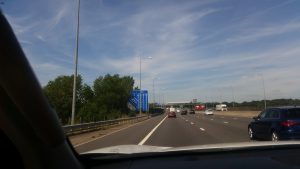 Blind spot: Transport Focus wants to see vegetation cut back so road users have proper visibility of important signs such as this on the approach to junction 28 (for Mansfield) of the M1 northbound

On an inspection trip as part of the visit, including parts of the M1, A50 and A38, we pointed out a number of places where signs intended to help drivers get into the correct lanes were obscured by foliage – there’s an example below. We then had a constructive discussion with the new team about the areas where we hoped it could improve standards.