Southern Rail: do passengers know about compensation due to them?

Most passengers were aware of the extra compensation offered by Southern Rail, according to new research from transport user watchdog Transport Focus.

Passengers in Transport Focus’s Transport User Panel showed high awareness of compensation being offered under the Season Ticket Compensation Scheme as a result of recent poor performance. They had heard about it in different ways – the most popular being via the media, Southern’s website, an email from Southern or from a poster at the station.

However, of those that responded there were still more than one in 10 who weren’t aware – which is of concern.

“It is good news that passengers on our Transport User Panel indicate relatively high awareness of this particular compensation scheme and also have found the process of claiming easy.

“We urge anyone yet to claim to do so by the deadline of 30 April.  Southern must also continue to tell their passengers about the scheme in a variety of different ways to reach those who don’t know or haven’t claimed.”

Three quarters of those who had made a claim found the process easy.  However, almost two in 10 found it difficult.  Some passengers with weekly season tickets had difficulties in providing proof of purchase to Southern.  We urge Southern to be alert to this concern.

The main results are are available here, with the summary shown below: 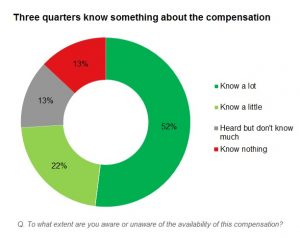 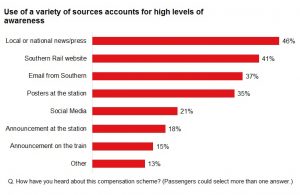 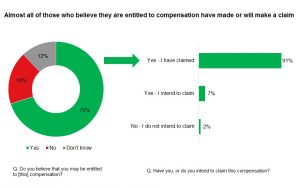 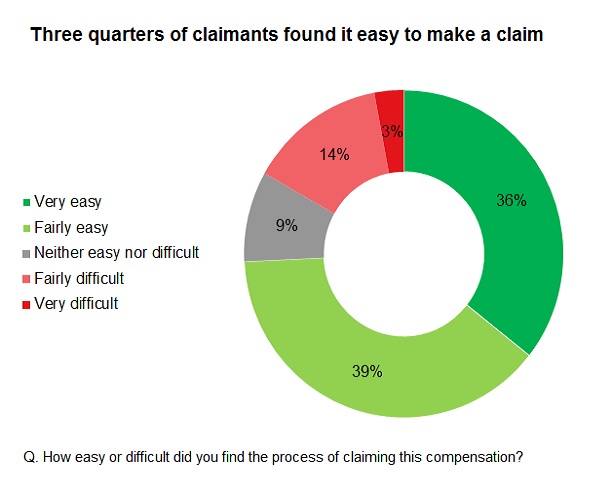 During recent months, we have been working with Southern Rail to ensure the passenger experience is at the heart of measures during the period of performance. We have been gathering their views in a variety ways and feeding them back to the company.  This time we wanted to find out from our panel what the level of awareness of the compensation scheme has been.

The panel members are passengers who receive surveys from us on a range of topics on a regular basis.  The compensation scheme was announced in December 2016 for those passengers who had held at least 12 weeks of season tickets for use on Southern trains between April and December 2016.  We therefore asked those panel members who had season tickets and used trains during that period about their experience.  We received more than 200 responses.

It is worth noting that panel members are likely to be more engaged with and more knowledgeable about issues on Southern Rail, so a low level of awareness within this group would have been a concern.

Transport Focus is the independent consumer organisation representing the interests of:

We work to make a difference for all transport users.