Waving off the first Pacer to be taken out of service 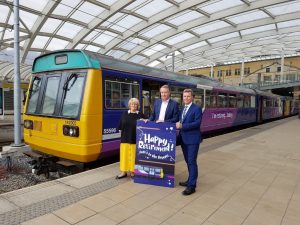 Unit 142005 that entered service on 20 February 1987 bowed out after a final journey from Manchester Victoria station to Stalybridge.

On 13 August David Sidebottom, Director at Transport Focus, turned up to wave off the first Pacer train to be despatched into retirement by operator Northern rail.

This is a milestone for rail passengers across the north of England, as under the terms of the franchise agreement between Northern and the Department for Transport, the entire fleet of Pacer “buses on rails” are due to be retired this year. They are being replaced in Northern’s fleet by 101 new trains, built by Spanish firm CAF at a cost of £500 million, and refurbished rolling stock from elsewhere on the network.

As Transport Focus told the press attending the farewell send off for unit 142005 at Manchester Victoria, few passengers will be sorry to see these outdated and uncomfortable trains depart for retirement.

Pacers have become a potent symbol for the need to invest in better transport infrastructure across the North. Their replacements are coming into service, though it’s now equally important that the railway improves punctuality and reliability of services, so passengers see every possible benefit from each new train.

Unit 142005 that entered service on 20 February 1987 bowed out after a final journey from Manchester Victoria station to Stalybridge.