Transport User Voice – September 2019 – Which are the best motorway services for users?

Results from the latest survey

If you were caught up in any serious congestion on the road network over the Bank Holiday weekend then you probably valued the opportunity to take a break at a service area. Perhaps you checked where might suit you best using the latest set of results from this year’s Motorway Services User Survey, published at the beginning of August. Alternatively, perhaps you opted to interrogate the data for yourself on the Transport Focus Data Hub? 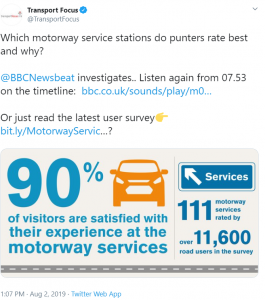 This year 11,600 road users had their say on facilities such as toilets, staffing, food and drink at 111 motorway services in England. Most site operators performed well with 90 per cent of visitors satisfied (nationally) about the experience offered to them.

Westmorland, operator of four sites in the survey, achieved the highest overall satisfaction score (98 per cent) and was the only operator this year to see an improvement on its overall 2018 score. Norton Canes (Roadchef) services on the M6 toll was rated England’s best motorway service are (for a second year running).

One message these results underscored this year is the safety role that motorway service areas continue to play by providing road users with the opportunity to take a break. Drivers in the survey confirm they feel better and are more alert after stopping at motorway services: some 25 per cent of visitors said they arrived at the services in a tired, stressed or frustrated frame of mind and this figure fell to just 5 per cent of people leaving to go back on the road.

It is also clear that across the country continued investment by operators is making a real difference to driver experience at service areas. Thurrock (Moto) was recently refurbished and it turned out to be the site with the biggest increase in satisfaction this year – up a full 25 percentage points to 93 per cent this year (compared to just 68 per cent in 2018).

Value for money continues to be the issue that users single out most to be improved – this year just 59 per cent of visitors rated the food or drink they bought to eat in the services as value for money, down from 66 per cent last year.

Of the 111 service stations, 33 received a satisfaction score of 95 per cent or above.

Each motorway service area, including the 78 which are in pairs on either side of the road, was treated individually. This means that results can be different for north and south, or east and westbound services at the same location.