England’s motorways and major ‘A’ roads are relatively safe places to drive. However, when a heavy goods vehicle (HGV) is caught up in an accident (is it just my imagination, or does this happen quite often?), it clearly has an impact on those directly involved, whether it is injuries (and sometimes worse), or delays while the road is closed.  But there is often an extra factor delaying reopening of the carriageway – diesel spills from the lorry’s fuel tanks. We are told that sometimes tanks get punctured and sometimes the fuel caps come off in the impact.

Diesel is the arch-enemy of tarmac! A spill can literally dissolve it and there’s no choice sometimes but to resurface the carriageway. This can add hours to getting the road reopened, with impact on thousands of users, not to mention cost to UK PLC.

We’ve talked informally to a few representatives of the truck manufacturers about what could be done to protect the fuel tanks.  It seems that, while it could probably be done, it would add weight to the vehicle, affect fuel consumption and make a model less attractive to buyers.  But there’s still the question of why the fuel caps seem to come off so easily.

We seem to have a bit of a 'we’ll deal with it when it happens' attitude to this problem.  And nobody seems to be factoring in the delay and cost – including the true cost to the economy and society.  I can’t help thinking that if the true costs were passed back to the party who spilt the diesel there’d soon be a business case for a light-weight design that makes it much less likely to happen! 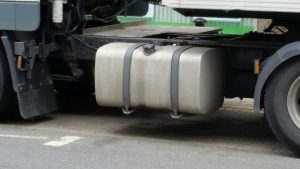 A HGV tractor-unit fuel tank illustrating its exposed location on the chassis.[/caption]