Information Pride on the buses?

Getting information about services into passengers hands, especially when they are changed, is obviously key. Good to see a great example of that from Abellio in Surrey and sorry to see a very bad example in Manchester.

Information can be made to reach relatively hard to reach spots – a colleague tells me:

“When we booked in at our campsite in Chertsey I was pleased to see that they had up-to-date Abellio Surrey timetables on display. Didn’t think to ask if that was campsite-manager initiative or the bus company.  This maybe says something about the market for visitors using the bus – but only if they know where and when they go?”

“Last Saturday I went into Manchester with my girlfriend by bus. Nice sunny day, so we went to watch the Pride parade, do some shopping and have some lunch. We enjoyed the parade, but about an hour after it finished we were ready to catch the bus home. We went to our usual stop by Manchester Oxford Road train station (not on the parade route) and noticed there were a few more people waiting than usual, but initially didn’t think much of it. There is normally a bus about every two minutes, but it soon became clear that no buses had come this way for some time and people were gradually slipping away and looking for alternatives. There was no visible information at the bus stop to show buses weren’t running and to advise where to go and whether buses were running by an alternative route. We decided just to walk towards home and we eventually picked up buses joining the normal route about half a mile down the road.

“Pride is a large annual event which attracted “tens of thousands” of people according to the BBC. So, perhaps as a passenger I could have thought of checking whether the buses might be disrupted? If I had I might have found this information here or here and honestly not been any the wiser! On the other hand, as the event and the disruption were planned in advance could there have been some clear visible information at the stop and advice on where to go to complete my journey?”

Hmm not so good. 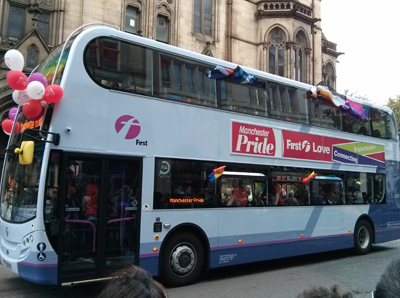 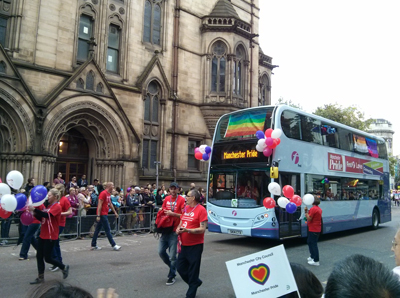