Arriving in Liverpool to join other panelists participating today in a Rail Delivery Group fringe event at the Labour Party Conference (which follows on from our joint consultation on how best to reform rail fares), I was reminded how on Saturday 1 September, Transport Focus held the last of three brilliant workshops in Liverpool with our Merseytravel Customer Community.

This group – made up of a range of 40 passengers from Merseyside – have also participated in regular online tasks over the past 12 months to help Merseytravel and Merseyrail design the new rolling stock. Merseytravel asked us to carry out this research to ensure that the passenger voice was heard throughout the design process.

This latest workshop provided a great opportunity to update the Merseytravel Customer Community on the latest project news, as well as unveil an impressive final stage mock-up of a carriage and driver’s cab. Attendees were able to board the train and were shown which elements of the design they had influenced, including the colour scheme, seat type and aisle width. Feedback from passengers was generally positive and there were lots of comments about the increased sense of space. 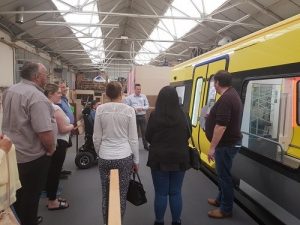 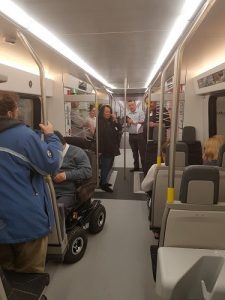 We also took the opportunity to show participants examples of on board signage and dynamic route maps that could be displayed, and they were able to comment on what worked well and highlight areas for improvement. Participants liked being able to see the whole journey route with a live indication of progress along the route rather than simply seeing the stops that remained. They also supported the use of information such as ‘minutes to the next station’.

Any outsider listening to the group for the first time would have been given a clear impression that engaging with passengers throughout the design process has meant that the new trains will be based on a design shaped by the people who are going to use them. A really pleasing outcome from this project.

This isn’t the first time we have seen the value of this approach. Transport Focus has previously done research to help Nexus find out passenger aspirations for new trains on the Tyne and Wear Metro wanted, and our ongoing work with High Speed 2 continues to help them design the railway of the future with the customer at the heart of the design.