The last 12 months we have been pressing Highways England to implement improvements to how the ‘Dart Charge’ is publicised and users’ experience in paying it, as they travel between Dartford and Thurrock. We’ve been down there to get a better feel for the experience of the Crossing as it stood a couple of months ago.

The toll booths were removed in 2014, but it’s not clear enough that under the new ‘free-flow’ system that you still have to pay to cross from Dartford. With no clear barrier blocking their way, first time users might genuinely not have realised that they need to go online or phone to make payment. Encouraged by this, Highways England have now installed new electronic signs flagging up in advance that payment is needed. More signs are planned, including at some points way before the Crossing, where drivers will be deciding what route to take. Also thanks to an intervention by Transport Focus, cyclists will now receive clearer information from Highways England on how they will be escorted through the crossing.

Improvements are also being made to how you pay. At the moment, you buy the right to cross in a specified vehicle in chargeable hours (0600 to 2200) without saying when. This causes complications for those hiring vehicles. At present, there is a risk that payments made by hirers could be covering individuals who rented the vehicle previously, meaning they could be caught for not paying their own crossing! 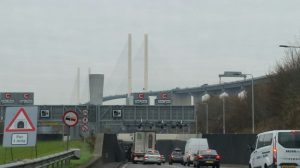 Adding a simple option to specify the date crossing should address this problem. The technicalities of the underlying IT system mean Highways England are taking longer to introduce this change. However, we understand that this will take place by June this year.

Transport Focus will keep an eye on whether Highways England planned improvements solve the problems road users have highlighted. If not, we’ll press for more changes to make it smoother to travel under or over the Thames.

It is interesting to note the figures published on the increased use of the Crossing, last week. Undoubtedly, with over 150,000 drivers each day, its right that road users have the right information when crossing one of country’s most vital bits of infrastructure.