Andy Warhol once said, ‘perception precedes reality’. The same might be said looking at the findings from week 14 of our Travel during Covid-19 survey, with a gap between experience and perception of public transport emerging as significant trend.

Car use has continued its upward trend in our survey, both in terms of the numbers driving and in how busy traffic levels are. Use of public transport has remained lower, though we are now beginning to see an increase – there is a clear trend emerging.

Since restrictions were lifted, we’ve seen a steady increase in people travelling to visit friends or relatives or for leisure (eating out, visiting attractions and so on). We’ve not seen a similar increase in commuting – it’s been steady for the last couple of months. So it seems that any resurgence in travel is largely leisure based.

This has implications for public transport because leisure use has traditionally been discretionary. If you didn’t like the experience or even if you thought you wouldn’t like it, you might not travel. With commuting there was often a sense of feeling trapped – you had to keep travelling even if you didn’t like it, though this too seems to be shifting as we develop a more mixed approach to home and office working.

All of which makes the gap between experience and perception one of the more significant trends being picked up by our survey. Safety seems to be at the heart of this. We asked people who’d made a journey by train in the last seven days whether they felt safe: 85 per cent said they felt very or fairly safe. When asking those who hadn’t made a journey by train only 42 per cent thought they would feel safe. Even when just looking at people who weren’t travelling but who used to be regular users before lockdown it only went up to 47 per cent. There is a big gap between those travelling and those not. 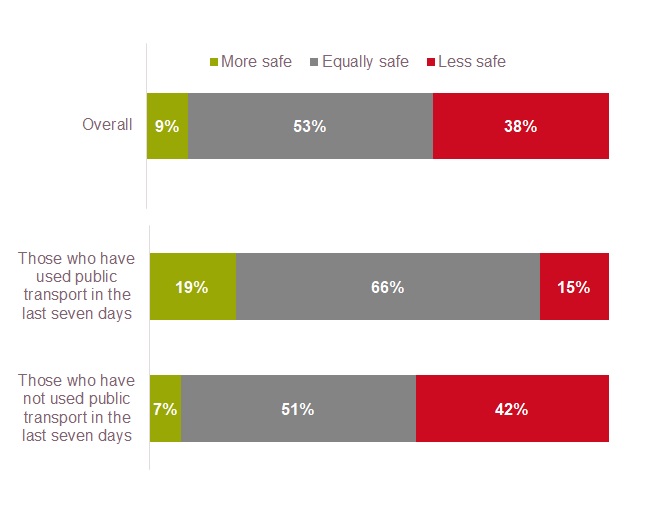 It is clear that public transport operators will have to work hard at changing perceptions. And it still seems as if the best way of doing this is to tempt people back and let them see for themselves. Timing will be key – it is going to be hard to do this while in the midst of local lockdowns and talk of a second wave. But at some point, operators will need to start looking at incentives and other offers designed to get people back on board.

It’s not just about incentives of course – there is a continuing need to reassure people and to tell them what is being done to make travel safe. We asked our Transport User Community what they felt the future would look like. It was clear that concerns about crowding or lack of cleanliness would remain for the long term. They wanted reassurance that trains are ‘Covid-ready’. Interestingly, solving the crowding issue was seen as a shared responsibility with employers, passengers and operators all doing their bit.

“From what the experts say Covid is going to be here for years, if not decades! I think transport companies are really going to have to up their game. Trains that are dirty, old, tired, lack of customer service on board, overcrowding are all going to have to go!” Male, 65, North West

The results also point to a significant change in attitudes towards commuting. Most felt that their work would, at a minimum, become more flexible and that their use of the train will reduce. Covid-19 has created a turning point where they no longer feel ‘hostage’ to rail. Operators will need to adjust to this as well, not least by introducing new flexible tickets that offer an attractive alternative to traditional season tickets.