What will passengers make of the announcement about the Retail Price Index figure for August? Important, as it sets the level of regulated (season tickets and off peak returns mainly) fares for January 2017 onwards.

We said that many passengers, mainly in London and the south east area, who have suffered poor performance, will find any fare rise totally unpalatable. We also don’t know yet how much unregulated fares (which the train companies are free to price) will change.

We also tend to focus more on passengers’ perceptions of value for money. See our chart here for current value for money scores from the National Rail Passenger Survey – even discounting the fact commuters tend to give lower ratings some of these scores are very low:

The RPI-only (that is, 1.9 per cent) figure – with no flexing on individual fares following Transport Focus lobbying – is not as bad as in previous years when the formula has got as high as RPI plus three per cent.

However, the RPI figure does not tell the whole story.

The Consumer Price Index figure is now used in many industries as a more realistic picture of what is happening to the economy and for calculating pay rises. The current CPI figure is 0.6 per cent meaning wages are not rising by as much as fares (1.9 per cent).

So the actual proportion of income passengers are now having to find to buy their rail ticket is rising fast – on top of some already high prices. Moving to the CPI figure for new franchises must be more transparent?

What does it all mean come January? See this chart (as used in the Guardian yesterday) showing the potential increase on some season ticket prices. 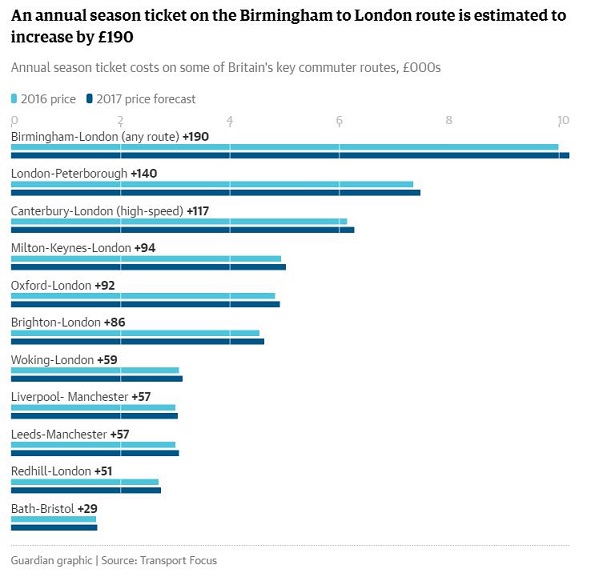