Many of us will have spent some of the Bank Holiday weekend navigating motorways.

We recently spent a very useful day with Highways England and Balfour Beatty (one of its main contractors) experiencing the M25 and the newly-opened four-lane sections of the M3 from junctions 2 to 4A. 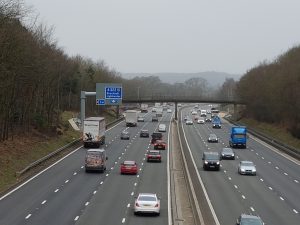 You may remember this stretch of the M3 had suffered for the last few years from very lengthy roadworks; the relatively narrow lanes caused a lot of comment and partly led to the decision to shorten roadwork lengths – a decision which matches our own research.

We carried out an in-depth look at the user experience of ‘smart’ motorways: Getting to the heart of smart

It found that users, unless prompted, seemed relatively relaxed about the lack of hard shoulders on ‘all-lane running’ sections of motorways. However, more information about how these motorways work in practice and what happens if you do break down would reassure. Also users wanted to see better use of the variable speed limits and messages – often they don’t seem to reflect what is actually going on.

The new section of the M3 is impressively well built into a very tight space in places – cables, signs and refuge areas have to fit in built-up areas and places of environmental sensitivity. Some of the engineering is impressive to ensure embankments stay solid.

The use of detectors under the tarmac to sense when traffic slows or stops (and automatically set speed limits or signs), and the increasing deployment of radar and CCTV means the network is under pretty constant surveillance. We later went to the control centre at Godstone and saw this in action, including an accident on the M25 being dealt with.

Seeing and understanding the community and user involvement in the construction of a replacement bridge over the M3 at Windlesham also highlighted the detailed planning needed. Interesting also to see the new coloured refuge areas intended to stand out much more. 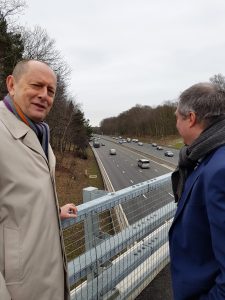 One side observation which again backs up our user research that road surface quality is the number one priority for improvement, is the ride on the M25 between junctions 8 to 10 – it is terrible. Concrete rumble.

So, overall, the management of the network is becoming more widespread and the refuge areas more visible. Using the space where the hard shoulder was remains a pragmatic way of boosting capacity without more land take.