Started reading a book about the Glencoe massacre on the train. A used ticket makes a handy bookmark. Out fell another old ticket – creatures of habit, aren’t we? 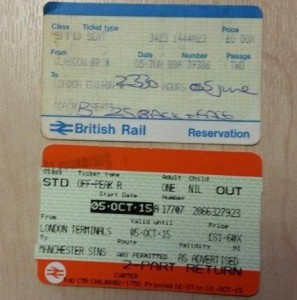 Back in 1988 I walked the West Highland Way. Used BR’s overnight seat coaches to get there – cannot really recall the experience, but have vague memories of being uncomfortable and cold. I suspect it was dead cheap.

The intervening 27 years have not produced a great leap forward in ticketing as the above picture shows. The so called ‘mag stripe’ ticket has lasted well. Developments in ticketing have not eliminated it, just added more sales channels. Print at home, barcodes, Oyster, contactless have all made inroads but the Magstripe remains stubbornly in use. However, it does still open ticket gates which other formats cannot!

There have been improvements to the information on the ticket and a new ticket design is coming, but it remains a dumb creature: ‘Route: any permitted’, ‘Validity: as advertised’ does not tell you very much.

Transport Focus has been doing much work for the Department for Transport on smart ticketing on bus and rail.

This year we hope to really engage with the rail and bus industry to get ticketing moving forward. For trains it is one that that is broadly in the gift of the industry. Many buses are already smart equipped for their own company’s tickets – the key will be to get smart spread among more operators in an area, as has just happened in Brighton. We have researched the passenger reaction (to be published soon) and it is positive – value-for-money ratings up. Let’s see if we can make it happen.