“Part of the road surface is very noisy and always makes me uneasy as it makes the car very loud.” Female, 17-34, South West

When it comes to resurfacing roads, while the end result is great, the roadworks involved can be a pain.

We recently met National Highways to talk about the roadworks due to take place this year. These will be to repair or replace concrete sections with asphalt on the A12 and A11. 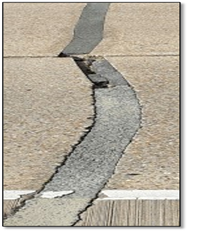 Most of the road network is surfaced with asphalt, also known as blacktop or tarmac, but some roads are built of concrete. These make up around 400 miles (four per cent) of England’s motorway and long-distance ‘A’ road network. We know from our road surface quality report that road users prefer asphalt roads to concrete ones partly because they are quieter to drive on.

“The condition of the road surface was very poor – potholes and damaged tarmac.” Male, 35-59, South East

“The route was not particularly congested but some of the road surface is old and worn.” Female, 35-59, North West

Road users want a surface without dips, bumps or potholes – in other words continuously smooth. They also want clearer white lines and ‘cat’s eyes’ which users regard as part of the surface and not something separate.

Concrete roads are mostly found along the eastern side of England, in the North East, Yorkshire, East Anglia and the South East. There are also some small stretches in the West Midlands, Merseyside, and Greater Manchester.

They were built in the 1960s and 1970s, when traffic volumes were half of what they are today. The concrete slabs they are made from have proved tougher and longer lasting than asphalt. Over the years they have needed very little maintenance.

However, decades of safe use and hundreds of millions of journeys mean these roads are nearing the end of their working lives. The roads need vital upgrades to ensure they remain safe, dependable and resistant to damage. Better surfaces will improve drivers’ experiences with smoother rides and reduce noise for many years to come. Our road users’ priorities for improvement research also found drivers’ top priority for Road Investment Strategy 3 is improving the quality of road surfaces.

We have called on National Highways to minimise the risk of disruption to road users and local communities, to ensure plans are coordinated with other roadworks and to help road users plan their journeys.

The upcoming works to replace concrete roads will likely have a negative impact on road users until they’re completed. We want to make sure National Highways does all it can to minimise disruption. Road users have told us they want to continue their normal journeys as much as possible with alternatives and diversion routes available when needed.

Our research has been shared across National Highways to ensure it delivers concrete improvements for users. We’ll be out and about on the roads soon to see what progress has been made.