Will the timetabled bus arrive?

This was the dilemma faced by a colleague earlier this week.

She wanted to travel from Bewdley in Worcestershire to Manchester to attend a meeting at our office there. Using the Traveline Journey Planner an attractive option was to catch the 292 bus leaving Bewdley at 7.57am arriving in Ludlow in time to catch the train to Manchester Piccadilly. The timing was perfect for the purpose.

Just to be sure, she double checked the 292 timetable. Indeed, it showed the bus leaving Bewdley at 7.57am. But a closer inspection of the timetable showed the letters ‘CH’. The key signified that the 7.57am bus ran only during Ludlow College holidays. During Ludlow College term time, the bus was to depart at 7.37am. But, if you aren’t familiar with term times, how do you know?

She phoned Diamond Buses customer services, and they didn’t know either! After a couple of tries, the customer services advisor contacted their depot. They said the bus would arrive at the earlier time – not helpful if the word of Traveline had been believed: she would have missed the bus.

Such uncertainty can result in a lack of confidence, putting people off using a bus.

As it turned out, the bus arrived bang on time at 7.36am and left at 7.37am. It was a beautiful morning with wonderful views over the English countryside from the Clee Hills out of the bus windows. 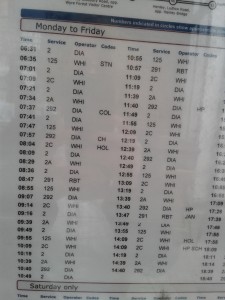