Getting home in one piece, or at all, is pretty important from a consumer point of view so safety is something Transport Focus keeps a close eye on.

Highways England has a tough target to reduce the number of deaths and serious injuries on its roads by 2020 and I know, with their airline industry backgrounds, that Jim O’Sullivan and Colin Matthews take it very seriously.  Clearly, human behaviours and human error is involved in a huge proportion of fatal and serious injury accidents.  But we’ve been asking ourselves, and Highways England, what more could be done to prevent drivers making mistakes.  Or to put it another way, help them use the road correctly.

We were prompted to ask after a nasty crash last autumn where somebody had driven for some distance on the wrong side of a dual-carriageway, eventually being hit – fatally – by somebody coming the other (correct) way.  It seems that this is quite a common problem – the Germans even have a word for it “Geisterfahrer”. Knowing the sort of forensic analysis that goes on with any collision on the railway we wanted to understand what is done on the roads.  Is there anything similar to the rail accident investigation process that looks at the facts, entirely separately from the legal processes? It seems that the road had been inspected at the point the motorist is believed to have got onto the wrong carriageway and nothing was found to be wrong. That was interesting as a member of our staff had had a look, purely from a road user perspective, and could see immediately a couple of things – signage and road markings – that might have stopped somebody making a fatal mistake at that particular location.  Can Highways England do more to develop a culture that asks “OK, it meets the standards but …”? 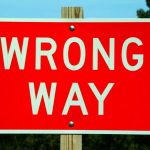 So if this is a world-wide problem with dual carriageways, what do other countries do to try to prevent it?  A bit of internet searching produced some interesting examples of much more ‘in your face’ signage designed to alert drivers that they are about to – or already have – made a serious error.  But in Britain, if there are any signs at all at the top of a sliproad, they are conventional ‘no entry’ red circles.  As far as I know we don’t try to grab the attention of anybody who has made a mistake and is heading into imminent danger.  Here’s one in English, and here are a couple of links – possibly Slovenia and possibly Austria.

And I was interested to read about higher-tech solutions in the United States.  The Rhode Island road authority has installed technology which detects vehicles heading down a slip road the wrong way and LED signs start flashing at them.  If they don’t stop, the police are notified and electronic messages warn drivers coming in the correct direction that there is a ‘wrong way’ vehicle ahead.

I think there are two questions here. Can Highways England do more after a ‘wrong way’ crash to make it more difficult for somebody else to make the same mistake? And should more be done to alert drivers who have made a mistake, to get them to stop before they cause an accident?