Do not travel! Can I claim?

The nights are drawing in and temperatures have now plummeted. But cast your mind back to the summer, particularly when the July heatwave managed to strike down the railway.

Train operating companies issued ‘do not travel’ advice and as predicted there was huge disruption.

However, the advice did not make it clear whether passengers could claim delay repay. We called on train companies to clarify this matter and change passenger charters to reflect that season ticket holders are entitled to compensation. This was particularly relevant as our Make Delay Pay campaign had launched the same month.

TransPennine promised at the time that it would review its claims process as a result of our badgering. It has since written to us with an update following the latest occasion where a ‘do not travel’ order was issued. 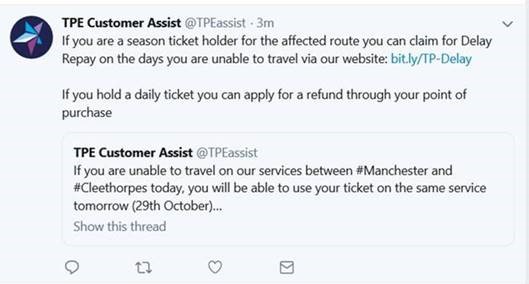 TransPennine is now communicating through social media channels, onboard its trains and at stations that season ticket holders can claim a day’s compensation. A victory!

Already this has made an impact and TransPennine has reported more claims as a result.

Transparency like this on the railway is essential and we urge other train operating companies to follow suit.

To travel or not to travel this...

We are using cookies to give you the best experience on our site. By continuing to use our website without changing the settings, you are agreeing to our use of cookies.
I Agree