Progress on a very welcome, much needed package of improvements is underway. See here for Network Rail’s summary of the work.

There is a great Network Rail/South West Trains video which explains what is going on better than any words can.

Work has already started to bring the old Eurostar terminal into everyday use, other platforms are being lengthened and lots of track work is being done outside the station to boost capacity and resilience. On top of that some new, longer trains are arriving. Platforms 1-9 will be shut for over three weeks in August 2017 and this will need to be managed very carefully.

The rail industry can do this stuff well. The work we did on the Bath and Reading projects with Great Western Railway and Network Rail, among other projects, proves this.

However, no-one wants another London Bridge. The alliance between Network Rail and South West Trains has unravelled in some financial aspects, but still seems to provide more joined up working and planning. The Waterloo works and the new trains seemingly will benefit from clear leadership. Down side is that, unbelievably, the franchise is being re-tendered in the middle of all this. Whoever wins the competition, it is crucial the complexities of managing services whilst Waterloo is being remodelled is given full attention before, during and after the re-franchise process.

So, good to attend an upbeat launch a few weeks ago. Claire Perry MP, the transport minister, spoke alongside Network Rail chair Sir Peter Hendy and others. An excellent fly-through video clearly showed what is going on.

Everyone is aware that information is key to keeping passengers on board during this period. What is happening? Why? When? What is the effect on me? When will it all be finished? What will be different in 2018 when it is all over? You cannot tell passengers early enough or often enough.

During the Bath and Reading works we sampled passenger views before, during and after the works. The feedback helped finesse the communications plan and helped result in passengers knowing what was happening and why. We are now working with our sister organisation London Travel Watch, Network Rail and South West Trains (and the new franchisee if there is one) to boost the passenger voice in this process. 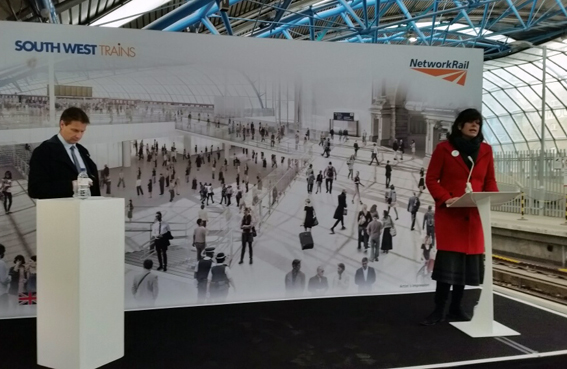